Sai baba is the name of a saint who lived in Shirdi, during the latter half of the 19th century. The Vijayadashami day of the Navarathri period is reckoned as the day of his Niryana. Today he is a household name in India and many parts of the World too. His name is added to long list of Gods and saints of India in conformity with the long-established custom. For a God who is beyond all identification, one more name is no excess baggage. He, Paramathma, is perhaps the only one, who has as many names and forms as his devotees want him to have. Many are witnesses to his imperceptible influence on their lives and destiny. Today Shirdi is one of the foremost pilgrimage centers of India, vying with Kashi and other places.

Whatever we know of him is through his authentic biography written by Anna Saheb. Sai Baba gave him the name, Hemandri Pant. Sai Satcharitra, is thus his own autobiography. When Anna Saheb sought permission from Baba to sketch his life story, the latter seems to have said: “Begin making note of events. My story, I will write, sitting in your heart”.

Sai Satcharitra, the Marathi original is written in the Abhanga style, a sort of prose poetry that can be sung while reading. This book is now translated into all languages of India besides English. Reading Sai Satcharitra is a form of worship. Many avow themselves to reading the entire Text in a period of seven days. Listening to such texts is more rewarding than studiously reading them. 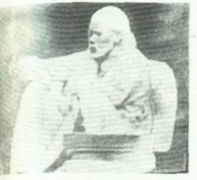 It is said that the book is a mesh of three strands. The author is very clear as to whom, the book is addressed. It is addressed to you and I, the common folks of the world, exposed to unexpected waves of happiness and sorrow. We go to the book to derive comfort and hope, strength and power to overcome our problems and difficulties from whichever source they may have come or arisen.

The author is in continuous dialogue with you, the reader. The author opens out his heart and soul to you and invites you to trust him and repose faith in him in the same manner. Those who cry in their forlornness, that they have none in the world, have a friend in Sai Satcharitra.
The second strand is the story, the event which is brought to the notice of Sai in a variety of ways and avenues. It is here we witness the wondrous deeds of Sai. The impossible is made possible. The third is the underlying Thathva that governs our existence. All these three streams join and split up right through the book. The book is an illustration of the Adhyathma Thathva. The Adhyathma Ththva is explained through the events, stories and the author’s dialogue with the reader.

We are all Sai devotees, because it is his will that we should be so. If you are his ‘sparrow’, he will draw you unto himself, without your knowing. We are all his devotees because of his grace, the result of an unknown merit of ours.

We, his devotees, carry a huge responsibility on our shoulders. We need to conserve what is received, broaden, deepen and extend it through our efforts. If nothing else, we need to preserve it intact, without letting it slip away from our hands. His grace isn’t a one-time act. It is the beginning of a flow that is endless, provided we care to deserve it. Nothing is given gratis. Nothing is withheld without reason.

Sai who was himself an illiterate fakir without a coin in his pocket, asked from his devotees, Shraddha and Saburi as Guru Dakshina. The Guru wants nothing from his Shishya, disciple. He is a giver. But in this world of give and take, double entry book keeping, you need to give back something, which corresponds in value, for what you have received. What the Guru gives is invaluable; there is none who can properly appraise it. A Shishya transformed in the image of his Guru, is the reward, the Guru seeks from his devotees. If we adhere to the practices of Shraddha and Saburi, the Guru is pleased. If we resolve and practice the virtues of Shraddha, reposing steadfast faith in our actions, and Saburi, tolerance total, in our lives, Gurudakshina is paid.
Shraddha is a total unwavering commitment to our actions. Our tradition says that this quality matures into Jnaana. Our actions fail, largely because we fail to do it, with Shraddha. Ashraddha which is its opposite creeps into us somehow. Our normal nature is one, where this virtue is practiced half-heartedly. We are a prey to sloth, skepticism and other forces that weaken our resolve, distract our attention, through their intrusions. Our work is sub-optimal even from our point of view. I do not think, I am saying anything that isn’t common experience.

Saburi, tolerance, patience, is something, which we don’t know really. On the other hand, we are ruled by intolerance in our midst. Intolerance breeds intolerance; impatience provokes impatience. Our anger issues out of this intolerance. We, not only disturb ourselves when we wear a suit of unrest, we pollute our vicinity and the surroundings, wherever we are. Social discard and large-scale unrest, domestic disharmony, are all consequences of intolerance. By a single act of restraint on our part, we can contribute to social good by a hundred-fold.

We will not be worthy of Sai’s discipleship, which after all is his grace, if we forget to pay this Dakshina every minute of our life. Once we cultivate this habit, it becomes a part of our nature. We will be successful in identifying the forces of intolerance that are lodged within us and driving them out. Once we accept that our intolerance and impatience is not outside us, we will have made great strides in the direction that Sai Baba would approve.

Apart from Dakshine of two coins, Sai has given another call to us which we seem to have totally forgotten. I want him to speak to you direct. Please listen to his words and their sound: “My Master says, Take, O take this away!’ Everyone says, ‘Give, give only to me! But no one heeds my words. No one listens to me attentively! His treasury is overflowing, but no one cares to bring the carts. Nobody will dig when asked to do so…Dig for that wealth and carry it away by the cart-loads” (Ch.32-161to 163).

“Whenever the exhaustion of righteousness takes place as also the rising up of unrighteousness, then surely do I create myself (in the world).
For the protection of the good and the destruction of evil doer, for the firm establishment of righteousness am I born from age to age.”

Thus, the lord declares in the Gita the motive of all divine incarnations and the exact nature of the occasions on which such incarnations take place. If we believe in the ultimate control of the process of history by God, we have also to believe that His influence will be decisive at all critical moments in that process. The safeguarding of righteousness is ever His care: and whenever moral values are in serious danger, God descends into the world to protect the good and destroy the wicked.

Incarnation then is an uncommon but by no means an extremely rare phenomenon. At every parting of way in history, God must have guide in some way or other mankind into the right instead of the wrong path. The greater the crisis, the more apparent is the intervention of God. But it is not necessary to think that God normally stands aloof from the universe, a distant of interested spectator, and intervenes only when things go dangerously wrong. He is the Antaryamin (the internal controller) of every being in the universe, and according to the Purusha Sukta, the entire universe is an incarnation of God. And His guidance of the world at once ultimate and all pervasive. To recognize His influence, it is not necessary for us to wait for a momentous crisis in the affairs to men. For He is the very ground of values and whatever things are possessed of glory or power or beauty or special excellence of any kind are revelations of the glory of God. They have in them more than that usual fraction of the power of God which is at the root of all existence.

Shri. Saligrama Subbaramaiah translated the Telugu Sri Sai Satcharita (Ovi to Ovi) by Kum. Maniyamma to Kannada language. He is a prolic Writer, Speaker and a great Shirdi Sai Baba Devotee. He worked as a Professor in Sri Venkateshwar University. He also wrote many other books and articles on Sai Baba of Shirdi