Sai Way to Shave Off Ignorance

The Mundaka Upanishad opens with Saunaka asking his guru, “Sir, what is that, knowing which, everything becomes known?”  Touched by the sincerity of his disciple-seeker, Angiras tells him that the experiential knowledge of Brahman, universal consciousness, with the guidance of a realized guru, can open the finite mind to its own cosmic expanse.
I requested my Guru Sri Radhakrishna Swamiji to explain Mundaka Upanishd in the light of Sai Baba’s blessings.

Dharma and Jnana
Elaborating on the notion of realization, Sri Radhakrishna Swamiji drew a distinction between acquired knowledge, intellectually grasped or ritualistically gathered, and intuitive knowledge, which is the spiritual experience itself, beyond the web of mind. He went on to differentiate 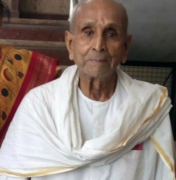 between the transitory character of the materialistic path and its fleeting benefits and the permanent nature of the path of renunciation, which Sri Radhakrishna Swamiji saw as a prerequisite to attain real happiness. He told me that this distinction between dharma and jnana as enunciated in Sai Baba’s life lies at the very heart of the Mundaka Upanishad.

Sri Radhakrishna Swamiji pointed the three beautiful similes, Guru Angirasa explains the intricate relationship between the universe and Self :  “As a spider throws afar its web and gathers it in as well, as plants sprout on earth, as hairs grow on the human body, so does the universe emerge from the imperishable Self”.

Dasa Ganu prostrated to Baba’s feet accepting him as ‘Sadguru’ – “Sainath you are my Sadguru indeed! Please initiate me into a ‘Mantra’ and accept me as your disciple.”

Baba told him – “No! never! Dear Ganu, I have never initiated anyone in a ‘Mantra’. My own Guru has never done it! For twelve years I served him. He loved me and protected me. When I asked him for a ‘Mantra’, he called a barber and got my head shaved! Shaved my head and shaved my ego and asked me for two copper coins! I wondered as to why he required two coins when he knew that I was penniless! How can I pay him? I was perplexed! He saw that. He told me that he does not need the money but the coins of ‘Shraddha’ and ‘Saburi’ – faith and patience! Clearly, he suggested that I should have these two qualities. Immediately I gave him what he wanted. No more conversation, nothing else to give or take! He would meditate and I would watch – from near or distance, always staring at him! This exactly was his ‘Mantra’. During meditation he may close his eyes or keep them wide open! But his steadfast gaze always showered grace on me. His gaze took care of me as a mother tortoise feeds her children! She does not feed them in their mouths. Her mere gaze from a distance makes them grow and guards them even if they are on the other side of the river! Likewise, even if I do not initiate you into a ‘mantra’, I am always with you! You will have my protection forever! Remember this much – YOU LOOK TO ME – I LOOK TO YOU!”

Swamiji pointed out that Sai Baba’s advice to Dasa Ganu is the cream of Mundaka Upanishad and the cause-effect phenomenon is the underlying origin of all projected things, which, though are real from our time-space continuum, are also finite and limited in nature.

This leads to a metaphysical rhapsody about the all-encompassing nature of Virat, the Absolute, and Angirasa draws another famous allegorical parallel about “Two birds living together, each the friend of the other, on the same tree .one eats the sweet fruit of the tree and the other simply looks on”. The first bird is the Jivatma, the finite self, eating and thereby experiencing both pleasure and pain, all as part of the inexorable cycle of desire and karma. The observer-bird is the real Self, witness to the turbulence alongside, quietly nudging us back to the ‘real-reality’, while we tumble along in our search for the elusive musk fragrance (which, really, is hidden within).

finite self, a four-fold measure which the great sage Angirasa in Mundaka Upanishad saw as cardinal to the spiritual quest: first and foremost was Truth, by which was meant a measure which was universally good. Second was tapas, austerities, to focus on something higher than outward distractions. Third was wisdom, which could be seen as a measure of discrimination. The fourth and last one was chastity, which Angirasa felt was necessary to transform the dross of basic instincts in man, though he held it up only as a prerequisite for sanyas. Angirasa then declares, “Satyameva Jayate!” – truth alone triumphs – the cardinal principle to be practiced as a striving towards perfection, where the finite self would expand and merge into the universal consciousness.

Angirasa expounds his concept of jnana in the central word of the Upanishad itself, ‘Mundaka’, which, etymologically, refers to a person who has shaved his head. In the larger sense, Guru Angirasa meant that munda, the shaving off, should actually be the shaving off of the layers of ignorance which cover us all, to enable us to see ourselves as being one with the universal Self. When we are one with the ‘Parabrahman’ Sai Baba, we can shave off ignorance ‘in toto’.