Sai Namajapa: Sure way for Self-Realization

The spiritual legacy of Sai Baba initiated by Sri Narasimha Swamiji embodied through his discourses and writings continues to resonate with legions across India and abroad. 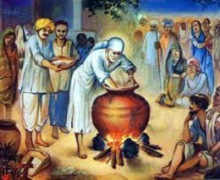 Narasimha Swamiji’s philosophy provides the householder with a blueprint for self-realization. It has an innate simplicity, sans dogmas, rites, and rituals, observing fasts or certain food habits, and the need to go on pilgrimages. Narasimha Swamiji’s roadmap to self-realization is uncomplicated as it emphasizes performing one’s duties with sincerity and honesty while remembering Sai Baba constantly – ‘Om Sai Ram, Jai Sai Ram, Om Namo Sai Nathaya’. Sai Baba himself has stated that there is no need to renounce worldly ties. One is only required to follow the path of moderation – neither abstinence nor over-indulgence, as one anchors one’s life to God in the form of ‘Sai Naam’. It is the crystallization of truth as it arises from the depth of each individual’s consciousness and has a pristine quality like sources of holy rivers.

As one performs duties in the reverberating aura of the ‘Sai Naam’, the ego is swept away by its overpowering force. In such a state of surrender to a Divine drama that is enacted on the stage of human consciousness, desires, disappointments, sadness, attachments, and human bondages, which are all subsets of the human ego, are washed away as one experiences the effects of Satchidanand.

According to Narasimha Swamiji, many of the rituals, rites, and ceremonies that have become entrenched in life as part of customary religious practices are ostentations and have nothing to do with human salvation. They propagate a culture that promotes a few and thrives on the weaknesses of many. To Narasimha Swamiji, human suffering is directly connected with karma, action, and prarabdha, destiny. Such sufferings cannot be diminished through rituals and one has to go through them with fortitude. However, we can insulate ourselves from the pain and anguish through the overpowering effect of ‘Sai Naam’ on the ‘aham’, ego, which is the root cause of suffering. When you do your deeds in the name of God through the ‘Sai Naam’, you are automatically absolving yourself of the consequences of such deeds, according to Narasimha Swamiji. You are so immersed in the ‘Sai Naam’ 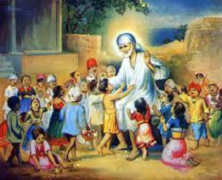 that it, in a sense, anaesthetizes the effects of joy, sorrow, pain, agony, and ecstasy, and attributes of pride, vanity, arrogance, despair, and depression that stem from them. In that state, you are in the world and yet out of it as an instrument of Divine will and experience the bliss of surrender and Oneness with God as part of the larger picture.

The path advocated by Narasimha Swamiji then does not pass through restraint, fasting, and austerity of body and mind. Nor does it have its milestones in orthodox principles. The prescription is to follow your ‘swabhav’ – to have Sai Baba close behind our thoughts and be in consonance with your innate self and let the magic of ‘Sai Naam’ do the rest.

In such a state, Prakriti, synonymous with nature, both of the individual and the universe, is the Maya that is a manifestation of the Divine and we must surrender to its ebb and flow while performing our part in the divine drama with love… and attachment to the ‘Sai Naam’ only.