Sai Baba connects each other

The essence of being human is illustrated beautifully through a Sai Satcharita proverb, and this was often recalled by Sai Devotees “I am a person through other people. My humanity is tied to yours.”

He would explain it as follows: “One of the sayings in Sai Brotherhood is the essence of being human. Sai Brotherhood speaks particularly about the fact that you can’t exist as a human being in isolation. It speaks about

our interconnectedness. We think of ourselves far too frequently as just individuals, separated from one another, whereas you are connected and what you do affects the entire world. When you do well, it spreads out; it is for the whole of humanity.” That is, the butterfly effect is as true among peoples of the world as it true in the intricate web of nature, wherein all beings, animate and inanimate, are closely interconnected.

“Not only I, but my tomb would be speaking, moving and communicating with those who surrender themselves whole heartedly to me.”– Shri Sai Baba (Chap 25, Ovi 05-108)

Summary of Sai Baba’s philosophy is as ‘I am because of who we all are.’ Such an attitude would likely lead us to the essence of the summum bonum philosophy that denotes the “fundamental principle on which some system of ethics is based, that is, the aim of actions, which, if consistently pursued, will lead to the best possible life.”

Dixit in his diary speaks about the social work in terms of its impact on ethical and social issues that require deeper understanding coming from a wider, humanistic perspective. Something that is desperately needed, in a world being riven by meaningless divisions and conflicts.

When we dehumanize others, 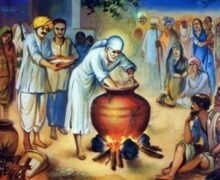 we end up dehumanizing ourselves, said Sai Baba, who felt that to heal both spirit and body, one had to learn to look at the positive aspects of any person, group or situation rather than focus only on the negative aspects. Both Dixit and Nanasaheb Chandorkar stressed on the significance of magnanimity, reconciliation and forgiveness rather than on revenge and retribution. This was the spirit in which the people lived in Shirdi. Sai Baba induced love and fellowship among people to overcome all the unpleasantness and tragedies, inspire forgiveness and herald a new era of hope, faith and love that would lead to peaceful and dignified co-existence.

“Always remember me only. Believe in me heart and soul. Pray without selfish motives and you will attain your welfare.”– Shri Sai Baba (Chap 25, Ovi 05-108)

Sai Baba provides one with a strong sense of community “to override divisions and heal the scarred collective psyche”. What we are as individuals is the sum of all that went before us; of all that we experience now and of all that could possibly happen in the future.