Irrespective of whether one is a renunciate or a householder, the words of wisdom contained in the Bhagwad Gita teach us the method of leading a balanced life — a life that attaches equal importance to the spiritual aspect of life and attainment of proficiency in worldly affairs. The Gita urges repeatedly that one should live in the world like a lotus-leaf, which remains pure and untainted despite being surrounded by filthy water.

The Gita opens with a vivid description of men and things on the eve of the great battle of Kurukshetra. At the eleventh-hour, Arjuna’s mind is tormented at the sight of his venerable preceptors, sires and grandsires, sons and grandsons who are present in the battlefield. The very thought of fratricidal carnage and bloodshed that would ensue causes untold agony to his delicate mind — so much so that he puts aside his bow and arrow and is in no mental condition to fight.

It is ironical that despite being a householder belonging to the warrior caste, Arjuna conducts himself like a sannyasin and puts up a plausible plea for abstention from activity and for withdrawing from the world, an ideal which was popular among certain sects at the time when the Gita was written. Significantly, his reluctance to fight is not an outcome of utter dispassion; it is because his mind is governed by false passion.

The Gita elaborates on whether action or renunciation of action is better and concludes that action is a better option. The discourse on Sankhya Yog lays stress on renunciation of action. This is because every deed, irrespective of whether it is good or bad, brings about its natural effect and binds one to the world, posing an impediment to liberation. It is, therefore, argued that one must renounce all action and become a sannyasin.

“Sit wherever you are and ask me. Why do you wander from place to place? I will satisfy your curiosity. Have this much faith.” – Shri Sai Baba (Chap 20, Ovi 79-80)

At the same time, the teacher of the Gita asserts that abstention from action is just not possible. This is because nature is at work on a constant basis. The teacher of the Gita does not reject the world as a mere illusion and action as a snare. He advocates leading an active life in the world with the inner life anchored in the eternal spirit. The Gita thus is a mandate for action; it teaches that perfection can be attained even while doing one’s duties.

“Destroy speech and all other senses. Make the mind steadfast. Then subvert the mind. Penetrate deep into the intellect.” – Shri Sai Baba (Chap 16, Ovi 93-98)

Gandhi in his commentary on the Gita opined that it is not desire that vitiates the action but selfish desire, which is the desire for fruit; and if an end is put to this selfish desire, the action performed won’t be binding. The abandonment of the desire for fruit encompasses both ‘sannyas’ and ‘tyag’, both having the etymological meaning ‘give up’. In this context, the person who completely abstains from performing action is not a sannyasi but only an idler or hypocrite. 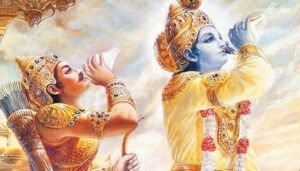 Krishna says in the Gita: “He who performs all actions in a spirit of surrender to the Eternal Being, abandoning attachment, is as unaffected by sin as a lotus-leaf by filthy water.” The Gita thus advocates detachment from desires and not cessation from work.