Sadasiva was a great saint who was a contemporary of Sai Baba. When I went to Karur in Tamil Nadu, Cahmaraj Uncle asked me to visit Sai Baba temple at Karur which has got a unique temple bell. When it was struck, it used to vibrate as ‘Sai Ram’. Sri Narasimha Baba who was alive at the time asked me to visit Nerur, a little away from Karur where the Samadhi of Sadasiva Brahman is established.

I recollected Sri Radakrishna Swamiji referring to Sadasiva Brahman on several occasions. I had also heard the Sringeri Pontiff, Sri Chandrashekara Bharathi Maha Swami, engaging in more than 2 hour conversation with Sadasiva Brahman nearly a century after his Maha Samadhi. I requested my host to take me to Nerur to have a holy bath in the Kaveri river and darshan of Sadasiva Brahman. This was in 2006.

Sadasivendra Sarasvati was a Sannyasin of great reputation, a born Sidda, who lived in Southern India in the beginning of the eighteen century. He lived near the town of Karur in the district of Tiruchirapalli. He was popularly known as Sadasiva Brahman. Sadasiva was a Telugu Brahmin by birth. He was born to Somanatha Yogi and his wife Santha at Madurai. His name was Sivaramakrishna. He was a brilliant student. He became well versed in Sanskrit. He gained profound knowledge in PrasthanaTraya and in the six school of philosophy. He studied Vedanta under Ramabhadra Shastri in Thiruvisanallur. 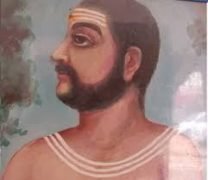 Sadasiva was married while yet a student. Once news reached Sadasiva’s mother that her son’s wife had attained puberty, she started cooking some extra nice things for that day. Sadasiva returned from his teacher’s house. He had to wait for two-hours for his meals. He thought to himself, “The life of a householder is very miserable indeed! I have not yet started my married life and yet I have to fast for two hours today. This is the beginning of the miseries of my married life. This gives me a rough idea of the future miseries I will have to undergo in my married life. Enough is enough.” He then determined not to enter the Grihastha Ashrama and left the house in search of a Guru.

Sadasiva’s Guru was ParamaSivendra Sarasvati. Sadasiva practiced yoga under his guidance. He entered into heated debates with the people. Some people made a report of this to the Guru. ParamaSivendra Sarasvati said “O Sadasiva, when will you shut up your mouth?” Immediately Sadasiva took a vow of lifelong silence and wandered about as an itinerant mendicant or Paramahamsa for some time.

Later, Sadasiva lived on the beautiful banks of the Amaravathi and the Cauvery in Coimbatore district. He spent much of his time in meditation.

Once while meditating on sandy banks of the Cauvery, Sadasiva entered into Samadhi. Suddenly, there was a flood in the river which carried him away and buried him under the sands. After the rainy season was over, a laborer dug a pit on the bank. His spade was covered with blood. He was struck with wonder. He, with the help of some friends, dug out a very pit around the spot. He found buried deep in the sand, Sadasiva Brahman. He shook the Yogi several times and brought back the Yogi back into consciousness. Sadasiva Brahman looked around him as if he had just awakened from deep sleep and walked away quietly as if nothing had happened.

Sadasiva Brahman had no consciousness of his body. He moved about in a nude state. Once he entered the tent of a Nawab in a naked state. There were ladies in the tent. The Nawab became very furious, took his sword and cut off one of the arms of the Sadasiva. The sage was not at all affected by this cruel act of the Nawab. He did not even take notice that his arm had been cut off. He continued his wandering as usual. The Nawab was struck with wonder. He knew at once that the nude man must be a great saint. He followed Sadasiva wherever he went. After several days, the sage noticed that a Mohammedan was following him. Sadasiva asked the Mohammedan, “Why do you follow me?”. The Nawab replied, “Venerable sage! I have committed a serious crime. Please forgive me.” Sadasiva said, “Well sir, you have not done anything. May I know what crime you have committed?” The Nawab said, “Revered saint! You entered my tent in a nude state when I was in the company of my wife and daughters. I became extremely angry and chopped off one of your arms. I did not know that you were a great saint.” Then only Sadasiva came to know that one of arms had been cut off. This clearly shows that he was above body-consciousness when his arm was chopped off. Sadasiva touched the maimed arm with the other arm. He immediately regained the whole arm. What a great miracle! The Nawab was struck with amazement and implored the sage to bless him. Sadasiva blessed the Nawab and continued with his usual wanderings. Saints do not bear any ill even towards those who persecute them. They are oceans of mercy. They bless even those people who are ready to take their lives.

Children used to play with Sadasiva. One day they said to the sage, “Swami, take us to Madurai. We wish to see the grand festival in the temple tonight.” Sadasiva made signs to the children to mount his head, back and shoulders. The children immediately found themselves in Madurai, before the temple. They enjoyed the festival, Sadasiva Brahman brought them back to their homes before daybreak.

Once some people came to beat Sadasiva Brahman with sticks in their hands. They were not able to move their hands. In Chidambaram, Sadasiva drank molasses in a boiling condition. He brought back to life a girl who died of cobra bite in Tiruchendur. It was usual for Sadasiva to be seen by the people simultaneously in several places.

Sadasiva has written many books in Sanskrit. Of these, the Brahma Sutra Vritti is the most important. He has written Dipikas for twelve Upanishads. Advaita Rasamanjari, Atma Vidya Vilasa, Siddhanta Kalpa Valli, Suta Samhitasaram, Yoga Sutra Vritti, etc are his minor works. Atma Vidya Vilasa is a small poem of sixty-two verses. In this book, there is description of the greatness of the yogi who has attained Self-realization. The book is very charming and of absorbing interest. Sadasiva’s writings inspire the readers and elevate them to lofty heights of divine splendor and glory.

Sadasiva told the Brahmins of Nerur, a village near Karur, that he would enter into Samadhi on a particular day and that a Brahmin from Kashi would bring a Bana-Linga which should be installed in a temple by the side of his Samadhi. The Brahmins accordingly dug a pit for the sage and waited for the particular day. To their great astonishment, a brahmin did come from Kashi with a Bana-Linga. Sadasiva Brahman descended into the pit, entered into Nirvikalpa Samadhi and merged himself in Para Brahman, the lights of lights. The Brahmins made the necessary puja or worship for the samadhi and erected a temple with the Bana-Linga by the side of the Samadhi. Even now thousands of people visit the Bana-Linga by the samadhi every year and attend the anniversary which is celebrated on a grand scale. Sadasiva Brahman entered into the samadhi simultaneously at Nerur, Kashi, Onkar and Kancheepuram. 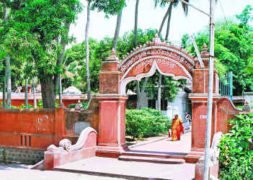 Sadasiva Brahman was a great Sidda, a perfect sage and a full-blown Yogi, a rare combination, a rear spiritual crest-jewel. He was an Avadhuta. He was an Ativarnashrami and did not observe caste differences. He used to take food from the hands of anyone. He had equal vision. He was the oneself everywhere. He roamed about wherever he liked. He was absolutely fearless and desireless, and never cared of worldly riches. He was an emperor of emperors, a king of kings, a yogi of yogis. He was a torch bearer of wisdom, a magnificent beacon-light for the aspirants.