Respect all, we are all part of one Sai Family

We keep drawing boundaries around ourselves, our imaginary limitations, and our equally imaginary sense of belonging to one ‘category’ of people.  Some differences exist, like gender. Some differences are created like caste, creed, color, nationalities, and religion.

Dada Kelkar, father-in-law of Hari Vinayak Sathe, was in charge of Sathe Wada. He was very orthodox and did not permit the usage of onion in his Wada. It so happened that he abused one lady for using onion in Sathe Wada. Baba, in his clairvoyant vision, observed this and wanted to chastise Dada Kelkar.

Dada Kelkar who was a staunch Brahmin was made to bring mutton from the market. On seeing his miserable state of mind, Baba advised him that he should not be very strict with mothers for using onion in the kitchen. 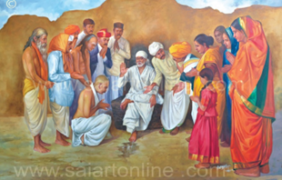 Sai Baba wanted Dada Kelkar to learn a lesson that all Sai devotees belong to one family and there should be no discrimination between devotees. He instilled the principle of Vasudhaiva Kutumbakam. meaning the world is one family, in Dada Kelkar. It is in the true spirit of respecting all human life.  The story is from the Panchatantra, a section called aparikshitakarakani, dealing with the unknown.

“He who abandons all pride is ever grateful to Him (God), and places all burden on Him (God), will achieve his objective.” – Shri Sai Baba (Chap 34, Ovi 131)

Baba told a story to Sathe and Kelkar.

It is about four friends who had grown up together and were now strapping young men. Three of them were highly educated, and the fourth was uneducated. But they were good friends, nevertheless.

In keeping with the way of those times, they decided to go to different places and earn by pleasing the king of that kingdom with their knowledge. When the king was pleased with their scholarship, he would award them riches be it in the form of gold coins or ornaments.

The four set off. The journey was arduous. A few kilometers into their journey, one of the four 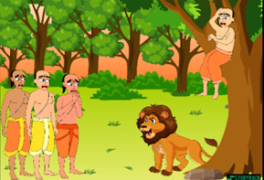 friends said, “We are going to earn. Kings award only those who are learned. Why are we taking this illiterate friend of ours along?  No king will award him anything. I will not share my earnings with him.” Fair enough, thought the second friend. “I agree entirely. I think he should return. You go back,” he said.

The third friend restrained them and said, “What use is wealth that is not shared? It is wealth only as long as it is useful… A narrow-minded person differentiates between what is his and what is someone else’s. To the magnanimous, all people are his family — Vasudhaiva kutumbakam.”

The two friends were equally large-hearted to see their folly and agreed to let their illiterate friend accompany them. The rest of the story is oft told. On their way, they came upon the skeletal remains of an animal. The educated friends got excited. Between them, they had the knowledge to bring the animal alive. “But wait,” cautioned the illiterate friend, “it looks like the skeleton of a lion. If it comes alive, it can kill us.”

The friends shook their heads in intolerance. He climbed a tree. Three of them brought the lion alive and were, sure enough, eaten up.

So, reflected the only one alive, that even though his friends had been wise enough to recognize the merit in the idea of Vasudaiva kutumbakam, the desire to exhibit their power of knowledge clouded their vision at the time of a true challenge. They could not pause to give him a serious hearing as they did not consider him their equal.

“He who abandons all pride is ever grateful to Him (God), and places all burden on Him (God), will achieve his objective.” – Shri Sai Baba (Chap 34, Ovi 131)

This resonates with Baba’s teaching of Vasudaiva kutumbakam.