Our Guru Bandu Sri Gopal Rao Inamdar took me and Sri Radhakrishna Swamiji on a visit to Mumbai in 1978 to visit the house of Rao Sahib Yeshwant Janardhan Galwankar.

Rao Sahib Yeshwant Janardhan Galwankar was one of the prominent members of the Sai Baba Sansthan Committee and Editor of the Sai Leela Masik for some years.

Yeshwant Janardhan Galwankar was the son-in-law of Anna Saheb Dabholkar or Hemadpant (author of Sri Sai Satcharitra). He was working as a Superintendent in the Home department of the Bombay Secretariat. He was taken to Shirdi by his father-in-law four or five times for darshan of Baba. In his first visit he did not get any strong impression about Baba, and this might be due to his young age. Dabholkar’s contacts with Baba also made him visit Shirdi later and in course of time in the subsequent visits, he developed more interest and devotion in Baba.

Once Baba appeared in his dream and asked for Rs. 2 as dakshina. After he woke up, he decided to send Rs. 2 by money order to Shirdi and he did send. Baba in the dream asked him to follow two directions, the first one – behave with honesty and integrity, (relating to his official position) and second one – be chaste and sexually pure. Galwankar said that he had followed those two directions without fail and with great care.

However, his visit to Shirdi in 1917 had created a great impression on him. When he went to the masjid for Baba’s darshan, Baba placed his palm over his head and this had a strong impact on him and at that time, he went into an ecstatic trance. He forgot himself and about the surroundings during that state of trance. Later he understood that Baba spoke about him and told the people in the masjid that Galwankar had integrity and purity already in previous births, that Baba placed Galwankar in his present mother’s womb and that Galwankar continued the same integrity and purity even in his present birth. Subsequently his faith in Baba increased manifold and then he went to Baba with full faith during Christmas and other vacations. Baba did not give him any Upadesh except what he told him in the dream.

He heard Baba saying that Baba was not a person having the 3-½ cubits height of body, but he was present everywhere and that the devotees should see him in every place. It was Galwankar’s firm belief that through Baba’s indirect inspiration only he was able to read the Gita, the Bhagavata and Eknath.

As he was totally involved in his official duties and work and also being comparatively young, he was not in a position to develop closer contact with Baba before 1918. But after Baba’s Mahasamadhi, he became more serious in life and got attracted towards Baba. 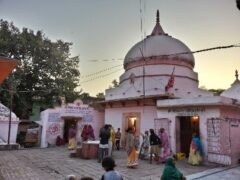 In 1921, he went on a pilgrimage with his family and visited Prayag and Kasi. In Baradwajashram at Prayag, he prayed to Baba to arrange darshan of any saint. Sometime after leaving the Baradwajashram, they saw a saint on the roadside. The accompanying guide said that this particular saint would visit Prayag once in seven years or so. But he picked up courage by Baba’s Grace and approached the saint. And the saint, instead of becoming angry, welcomed him with raised arms saying, “Come child.” They were all blessed by the saint. In this way, Baba answered his prayer immediately in that year. In this fashion, he developed his religious bent and started paying more attention towards his spiritual development.

Later in 1932, he had a dream in which Baba appeared and asked him, “What do you want?” His reply was, “I want prem (love) and only prem.” Then Baba blessed him saying, “You will have prem” and disappeared. After that dream, he had spells of prem gushing through him while meditating, while reading and even on other occasions. Thus, after Baba’s Mahasamadhi, his devotion towards Baba made his life nobler and more spiritual.

Yeshwant Janardhan Galwankar passed away in 1945.

We had a darshan of kafni given to him by Sai Baba and had a blissful time.