Sai Baba looked not only after the material well-being of a devotee but also his spiritual welfare. One morning Sai Baba told Mrs. Jog: “Tai, a she-buffalo will come to your backdoor in the afternoon. Feed her well with puranpolis with ghee applied to them.”

Mrs. Jog faithfully prepared puranpolis, offered naivedya to Sai Baba and in the afternoon noticed a she-buffalo standing at her backdoor as predicted by Sai Baba. Mrs. Jog was at first happy that the animal consumed puranpolis to her heart’s content but was upset when in a short time the buffalo sat down, was indisposed and died on the spot! Frightened, she examined all the vessels used for cooking, including the one in which puran was cooked to see whether any extraneous material had fallen into them. She noticed nothing of the kind. She was thoroughly fazed. If the buffalo had died as a result of being overfed, the sin of its death would be on her head. 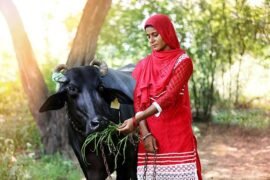 From a strictly mundane point of view, if the owner of the buffalo came to know that it had died after being fed on puranpolis, he could hold Mrs. Jog responsible for the death of the animal. The protector of devotees is ultimately the Lord. So, she took refuge in Sai Baba and apprising him of the facts admitted that she was disconcerted. Baba assured her that there was no reason to worry. He said: “The owner cannot harass you. Spiritually you have committed no wrong. There was only one desire left in the buffalo; to eat puranpolis. I satisfied its desire, working through you. The she-baffalo will now be released from its yoni (class or nature) and will be born again and merit a good birth. There is no need for any anxiety on your part.”

It was a revelation to Mrs. Jog and an insight into Baba’s way of functioning.