In 1979, after attending the Sai Leela Contributors convention, I accompanied Sai brother Lt. Col. Nimbalkar to Pune and I had the privilege of meeting Swami Rambaba, a 120-year old saint who had visited Baba in 1914 and had come down to Pune. Then we went to Sapatnekar’s residence to meet his son Dinakar and had the blissful opportunity of listening to the great Sai Leela of his birth. We met Mahadev Sapatnekar’s wife Parvatibai and son Dinakar.

Dinakar was the third son of Mahadev and Parvatibai and held the position of a judge in the State of Maharashtra and later retired. At the time of interview, Dinakar was 68 years old. Lt. Col. Nimbalkar also interviewed at the same time his mother Parvatibai Sapatnekar, who was 88 years old at that time.

Sapatneka’s son, Dinakar disclosed another interesting fact about his father, Mahadev and said that he was a devotee of Sri Datta and would frequently go to Gangapur. Dinakar’s mother, Parvatibai Sapatnekar narrated, in the interview, all her experiences with Baba. She said that she was married at the age of 13. Her husband was practicing as a lawyer at Akkalkot, and his parents were staying at Madhegaon. 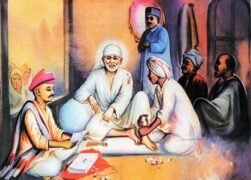 Dinakar narrated the circumstances under which his parents visited Sai Baba in 1913 and how Baba blessed them with 7 children, and he was the 3rd son of his parents. After one year in 1915, Mahadev was blessed with a son and the boy was named as Muralidhar. His parents went to Shirdi with the boy when he was eight months old. Afterwards two more sons were born to them, and they were named as Bhaskar and Dinakar, Dinakar being the youngest. They again visited Shirdi with all the sons. In all Mahadev had eight sons and one daughter. Only then she realized the full meaning of the boon granted to them by Baba. When she went to Shirdi for the first time, Baba said, “Take! One, two, three, four! Take as many as you want.” In this way Baba blessed them with children. Thus, Baba gave them as many children as they desired.

Parvatibai Sapatnekar was alive for 65 years after Baba’s Mahasamadhi. She passed away on 30th October 1983. She was a blessed lady who had the opportunity of seeing Baba when he was in mortal coil and witnessed the Grace of Baba and the miracles in her family. We are fortunate to have received the firsthand information of her experiences with Sai directly from her.