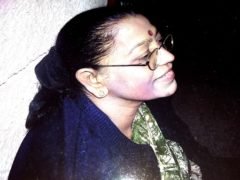 From Raipur in Chhattisgarh, we were on our way to Malhar after visiting a few Sai Baba temples. “Should we stop at Frog Island (Madku  Dweep, off Raipur-Bilaspur highway)?” our driver asks. We’re actually on our way to a place called Malhar in Chhattisgarh, which also happens to be the name of a Hindustani raga. Legend has it that Emperor Akbar’s magical musician, Mian Tansen, sang the tune to cool the climate and bring down torrential rains! The prospect of madku, frogs before malhar, rain, does not sound odd at all. In fact, our detour turned out to be most propitious in retrospect. 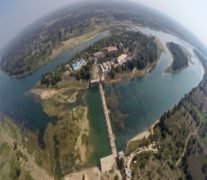 For starters, we discovered that Madku Dweep was so named because the Mandukya (Frog) Upanishad is said to have been composed on this island in the middle of the Sheonath River. We learn this from a giant sized stone statue of Rishi Mandukya on the island. He is shown scripting his magnum opus, with a couple of amphibians sprawled around him.

If we have just one quibble, it has to do with the thick size of the kitschy manuscript. In reality, the Mandukya happens to be the shortest of all our Upanishads. It has just 12 terse verses! However, it is also venerated as the most powerful of them all. With the study of this Upanishad alone, one can hope to leapfrog into moksha (liberation),  We recited Vishnu Sahasranama in that holy atmosphere.

In a famous hymn, the Rig Veda also likens the croaking of the frogs to the Soma chant. “Like 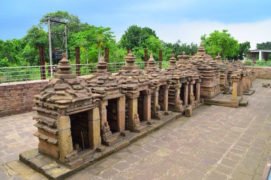 sages sitting around the brimming vessel invoking the Soma rite, the frogs have lifted their voices towards heaven,” the Vedic bard proclaims. “The frogs who give us cows in hundreds, lengthen our lives in this most fertilizing season of the rains.”

Most cultures do regard frogs as living reminders of fertility and rebirth. Also, because of their very visible life stages, they epitomize transformation.

However, while a tadpole turning into a tailless croaker is common, the metamorphosis of the frog into Prince Charming is the stuff of pure magic. This is also what the Mandukya Upanishad asserts — that we are all princes walking around as frogs in disguise! We were confident that Vishnu Sahasranama made us realize this great truth.

Ultimately, truth alone triumphs; Satyameva Jayate, the Upanishad famously proclaims. After Independence, India adopted this grand declaration as its motto or mission statement. The Mandukya also presents an exegesis on the sacred syllable Aum and asserts the existence and nature of Atman along with a theory of four states of consciousness.

The Upanishad is also renowned for having inspired Gaudapada’s classic commentary called Karika. This became a foundational text for Advaita Vedanta philosophy that Adi Shankara championed. The acharya who wrote a commentary on the Karika, was a disciple of Govinda Bhagavatpada, a direct disciple of Gaudapada.

Right now, our concerns are more mundane: one that entails hopping across a concrete barge. This is part of India’s first experiment with privatization of rivers that covered a 23-km stretch of the Sheonath River and was widely criticized for its alleged ecological and social damage.

Frog Isle turns out to be a veritable treasure island replete with many archaeological gems. Medicinal treasures with dense strands of ankola trees, ‎an Alangium — this mystical tree gets mentioned in Adi Shankara’s Sivananda Lahari, waves of Shiva’s bliss: “The mind reaches for the feet of Pashupati, the Lord of Animals,” the acharya exclaims: “Ankolambijanijasantathi, just as the seed of the ankolam clings to the mother tree as its true offspring.” 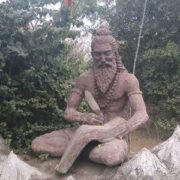 The Tamil text Sevaka Chintamani also extols the tree, which is revered as the SthalaVriksha or the sacred tree of the shrine in at Tiruvallur near Chennai and Vairavapatti near Madurai.  Ayurveda also ascribes miraculous anti-venom and anti-rabies effects to medicines derived from the tree. But propagation is said to be fiendishly difficult because the seeds of the tree manage to migrate back to the main trunk and fuse with it (as alluded in Adi ShankARA)

Are Mundaka and Mandukya Upanishads one and the same?

I asked my husband on these points. I had mistaken Mandukyam and Mundakam as different pronunciations of the title of the same Upanishad, only now I learnt that they are in fact different.

My husband replied, “No, they are two different Upanishads.”

1. Mundaka literally means “shaved trunk of a tree”. It seems to imply the message of a self-realized monk established at the highest state of realization. The word Manduka means frog. Another root for the Upanishad’s name is MANduka which literally is “a Vedic school” or means “a teacher.
2. The MuNdaka Upanishad opens with declaring Brahma as the first of Gods, the creator of the universe to be the foundation of all knowledge. The text then lists a succession of teachers who shared the knowledge of Brahman with the next generation.
The MaNdukya Upanishad is an important Upanishad which presents several central doctrines about the syllable OM, and that it symbolizes Self.
3. The MANdukya Upanishad is a prose containing only twelve verses.
4. Both are parts of the Atharva-Veda.