It was just after Rama Navami in 1916. Dasganu Maharaj gave a scintillating ‘Pravachan’ on the previous day. When he came to Masjid, Baba complimented him on his performance and suddenly turned towards Dada Kelkar and asked him, how do you consider Rama as divine??’

‘According to Valmiki, the seventh avatar of Vishnu did not know his divinity while in his mortal form. He says, “I am only the son of King Dashratha”. Yet there is an occasion when he ‘forgets’ and behaves like the god he is. That is when he cremates Jatayu in the jungle and declares, “I am sending you straight to Heaven.” It is a tantalizing slip that is immortalized by Valmiki without calling attention to it. We are supposed to grasp the significance of it ourselves.

We learn early on that Rama has dark curls on his forehead and a glossy dark-brown complexion. Hanuman describes Rama to Sita as having ‘coppery eyes’ of gleaming golden-brown, broad shoulders, and mighty arms.

Sai Baba elucidated that as for his character, the epic begins with a list of sixteen good qualities that Sage Narada seeks in an ideal man. Brahma tells him that Rama is that person. It is mainly by Rama’s reactions in deed and word that we obtain impressions of his divinity. However, a glimpse of what Rama is like as a person at merely seventeen comes from the citizens of Ayodhya. When Dashratha asks his subjects what they feel about Rama becoming the crown prince, there is a roar of approval. Citizens of Ayodhya are so happy at the prospect that Dashratha thinks, “They love him more than they love me”. 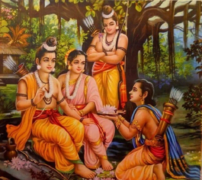 The people say of Rama, “He speaks lovingly to everyone and his words have never been false. He respects elders and wise people. He is genuinely interested in the welfare of others. When out riding, he stops and talks to the man on the street. He readily forgives and forgets a wrong but remembers even the smallest nice thing that anybody ever did for him. He is well-read and well-mannered. He is a ‘drapi’, meaning he is angry only when rightfully required and in the right  proportion”.

The likable character of Rama begins to take shape for us from this vivid description. But it is only when the big tests come that we get to properly gauge Rama’s nature. For one, his lack of greed when he promptly and gracefully accepts being exiled. Secondly, his forgiving nature, when he meets Kaikeyi at Chitrakoot. Despite the great wrong she has done him, he behaves well with her and tells Sita and Lakshmana to do the same.

Thirdly, his humble nature of making friends with peopleof all classes.

He hugs Guha the boatman and Hanuman. Be it his people, great sages in the forest, humble folk like Guha, a motley crew of Vanaras given to drinking and carousing, a person of superior intellect like Hanuman, or an asura prince like Vibhishana, Rama attracts affection and support just by being himself – open and friendly.

Fourthly, Rama loves deeply and does not deny his pain in a macho way. Moved by the beauty of Lake Pampa, he laments aloud for lost Sita. During the long, weary wait through the monsoon before the search for Sita can resume, he thinks of Ayodhya and does not hold back from saying so. From Rama, we learn that it is not at all unmanly to feel and express pain.

In sum, a picture emerges of a person who feels things deeply but tries to do his best despite setbacks after setbacks while keeping his dignity and without losing consideration for others. That is his real divinity.

While complimenting Dasganu Maharaj on his Ramayana discourse, Sai Baba illuminated us with so many details that we weren’t aware of.