In the company of R. B. Purandhare

Raghuvir Bhaskar Purandhare was a staunch devotee of Baba. He heard first about Sai Baba in 1909 and went to see him in Shirdi. R.B. Purandhare was always desirous of association with sadhus and saintly people. He heard that Saibaba was a saint, a God-Incarnate or walking God in Shirdi through the discourses of Das Ganu Maharaj, so he felt attracted to him and decided to visit Shirdi. Baba also appeared in Purandhare’s dream and also called him to visit Shirdi. At that time his elder daughter (aged then six months) was very ill and so his mother objected to his going to Shirdi. Purandhare still insisted on going to Shirdi and took his wife, elder daughter, and his mother with him to Shirdi. He remained there during his first visit for thirteen days. On the third day of his visit, the child became well. Baba did not permit Purandhare to go back till the thirteenth day. Though he was very poor, he did not visit Shirdi for any pecuniary benefits. Baba told Purandhare’s mother that for seven centuries, Baba was associated with her son.

Once Purandhare’s wife got an attack of cholera and the treating doctor did not give any hope. He saw Baba at the side of Datta Mandir in front of his Dadar house and Baba ordered him to give Udi and Tirtha to her and then disappeared. He gave accordingly and after half an hour, she had recovered fully and her body became warm.

Purandhare was very poor and had no support for his livelihood. Purandhare’s mother struggled hard to make both ends meet. Her family was living in poverty. Even Purandhare continued to live in poverty till his last breath. But he secured Baba’s grace and blessings in abundance. He worked as a Bench clerk in a Court. He was very simple, sensitive, and highly emotional. He used to vent every emotional feeling strongly. When angry, he would at once burst out in a fit of anger and was ready to quarrel. And when felt happy, he would come out to express it. Purandhare was short-tempered in his approach and Baba advised him not to pick up any quarrel with anyone even if someone was abusing him, and to handle any situation calmly.

Once at the instance of Purandhare, Radhakrishnamai, and some other devotees, a palanquin was brought and they wanted to bring it inside the masjid. As usual, Baba did not permit it, as he cared nothing for any pomp. Thus the palanquin was left outside without any guard protecting it during the night. That night some thieves came and stole away the silver horses. When complained to Baba about the theft, Baba said, “Why did not the thieves take away the whole palanquin?” 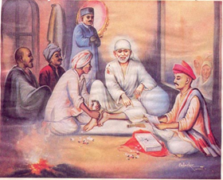 This indicated Baba’s Vairagya and much contempt for wealth. Purandare and Radhakrishnamai wanted Baba to live in royal dignity and that was why they were making all these arrangements. At this stage, to protect the palanquin, they wanted to provide a garage for keeping the palanquin. They decided that the place next to the masjid on one side should be turned into a garage and for this purpose, they wanted to arrange rafters that should be inserted into the wall of the masjid for support.

Generally, such drilling in the wall of the masjid was considered a desecration. However, due to the devotion of these Ankita bhaktas, Baba permitted and that was the love and attachment between Baba and Purandhare mainly and for others in general.

When Narasimha Swamiji interviewed him in 1936, Purandhare gave not only the details about his experiences with Baba but also minute details about other important devotees and other incidents that occurred in Shirdi. Thus he gave abundant information about so many instances that happened in Shirdi and threw a lot of light on Baba’s 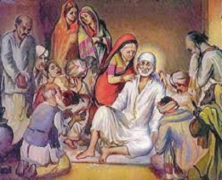 life and mission and miracles for the benefit of posterity. Purandhare also served the Shirdi Sai Baba Sansthan as Joint Treasurer. In the interview, he told Narasimha Swamiji that Baba had a hole in his ears and he had also seen Baba taking bath in naked condition and observed that Baba had not been circumcised. We could understand that Baba was a Hindu Fakir who lived in a Hindu Mosque. Purandhare spent every minute in Shirdi in the service of Baba and passed away peacefully in 1948. Blessed was his great soul. The very thought of remembering Purandhare brings to a reader’s mind his qualities of excellence and humility. He was a very simple person with hardly any desires and demands.