Say the word ‘Gubbi’ before any native of Karnataka, and he will instantly utter ‘Chidamabara Ashram’ as if to complete your utterance. The two words have for long been synonymous in the minds of locals. Gubbi — literally, a ‘sparrow’ — is a small town 100 kilometers north of Bengaluru in Tumkur district. 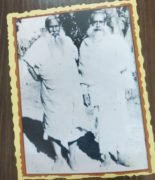 The Ashram, whose full name is Sri Chidambarashram, was founded almost eight decades ago by Swami Chidambara, an ascetic and sage of the Awadhuta class. Born in 1889, Sri Chidambara was closely associated with Sri Narasimha Swamiji and Sri Radhakrishna Swamiji. He served as a Postmaster in his ‘Poorvashram’ and his grandson Sridharamurthy Sharma is intimately known to SAI AURA team.

Swami Chidambara had inherited a strong love for Vedanta from his parents. In quest of the Self, 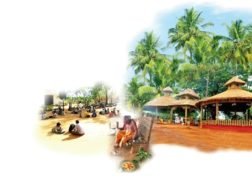 the young man did what seekers have generally done down the ages; he trekked to the Himalayas in search of a Guru. The mountains charmed him, but the mission failed. He returned home, and found his Guru, Sri Narayana Bhagwan, in his own neighborhood! It is common to complain that the demands of occupational work and pursuit of spirituality are mutually incompatible. We believe it must be either this or that at a given time, not both. Swami Chidambara calls the lie in this regard. His Guru-seva, tapasya and the study of Vedanta went alongside his official duties in the postal service. In due course, purged of mundane desires and established in the Self, he resolved to retire to the solitude of the Himalayas for the remainder of his life. It was then that Professor T.S. Venkannaiah of Maharaja’s College, Mysuru, reoriented the determined ascetic. Self-realization, he argued, is a personal pursuit, but thereafter, instead of whiling away your days in solitude, why not plunge into selfless service of society? This struck a hidden chord in the sage’s mind. With the torch of Sai movement led by Sri Narasimha Swamiji, he suddenly discovered his mission in life. The Bhagwad Gita represents the essence of Vedic philosophy. Nishkama Karma Yoga, the art of living an active life indifferent to results is one of the two fundamental take-aways from the Gita. The other message lies in achieving synergy between Jnana, Karma and Bhakti. Swami Chidambara had achieved and exemplified this. He resolved to spread the good word, travelling from village to village to address small and large groups of common people. Nothing was sought in return. Nothing was forced upon anybody. People joyously lent their ears and minds.

People had found a new direction and a true guide. Swami Chidambara became a household name. The Swami was distressed by the corruption of puja-practices, because the accompanying mantras were in Sanskrit beyond the comprehension of the common folk. The very object of puja was corrupted by the basic urges for quick-prosperity and mundane gains that inspired it. The Swamiji, therefore, designed for women folk a basic template for puja of the Cosmic Shakti, Lalita, and transcreated into Kannada the accompanying mantras. The puja and chanting of mantras are effective only if their importance is understood. Swamiji argued that it is better to chant it in correct Kannada than in wrong Sanskrit. The Lalita puja as formulated by him is still in practice in countless homes in Karnataka.

Meantime, the Swami was in search of suitable land to raise an ashram. The search ended near an obscure railway station called Gubbi on the Bengaluru- Pune railway. While the habitation was confined to the south side of the station, this land was on the other side. It was thick with thorny bushes and a haunt of wild beasts and poisonous snakes. Working against all odds, battling against reptiles, the land was cleared. When a huge snake hive was dismantled, there emerged a stone image of Hanuman.

Sri Chidambara believed his choice of land was vindicated. A temple was raised here, placing an image of Dattatreya atop the image of Hanuman. The temple has since then been known as Datta’njaneya Temple. Dattatreya is the patron deity of Swami Chidambara. The name relates to the Lord born as Rishi Atri’s child and connotes ‘Given to Atri’. Datta’njaneya subtly suggests ‘the Given Hanuman’. The temple became the nucleus of the ashram, and gradually the land transformed into a spiritual resort set in a coconut orchard. To groom young brahmacharis in Vedic ways, a school was started — the first high school in the district of Tumkur in Karnataka. The school admits brahmacharis as residential students and is open to all day scholars, irrespective of caste and creed.

Education is totally free. It is a joy to watch young boys with spiritual glow on their faces reciting Vedic chants in a copper voice while performing yajnas every day. In the mess, before every meal they chant the sanitizing mantras for sanctifying the food, ‘anna-dosha shudhhi’. All this combines with volleyball in the afternoon and browsing in the library.

The Swamiji shed his mortal coil in 1966. But his spirit continues to guide the ashram. A core commandment that Swami Chidambara set for the ashram is never to turn itself into a spiritual shop. In his later years, his associates were at times concerned about finances. They suggested that the ashram should mobilize donations and plan for establishment of a corpus to sustain itself financially. The Swami shot the idea down. He felt this was a betrayal of faith in Lord Datta and a vain attempt to manipulate the divine will. To drive home his point, he picked a handful of mud and told his disciples: “Look, by the grace of God and the Guru, I have the power to transmute this dust into gold, but I shall not do that. The mighty and wealthy empire of Vijayanagara crumbled to ruins when God willed so. What then of this ashram? Whatever it be, may His will prevail always!” It is heartening to find the ashram live and kicking even decades after the Swami’s departure. Just like Sai Baba, Swami Chidambara has not departed, feel his devotees!