The Mahabharata story told by Dasganu Maharaj is as follows

There is a story in the Mahabharata which I find more edifying, enlightening and uplifting than even the Bhagwad Gita. Now that the war is over and the Pandavas are reinstated, Krishna decides to call it a day and go home to Dwaraka. On the way he meets an old acquaintance, Utanga, a revered Brahmin. Krishna alights from the chariot and salutes Utanga who asks him, “How are you, Krishna? Do your kin the Pandavas and the Kauravas keep well?”

Krishna was surprised. “It appears you are not in the swim. An earth-shaking war took place between the Pandavas and Kauravas. the Kauravas all perished and….” Utanga was enraged.

“Krishna, why did you allow this tragedy to take place? I will curse you for your lapse.” Krishna was alarmed. Already there were some heavy curses on his head, including that ominous one of Gandhari. He said, “Revered Brahmin, hear me out first and if you still feel like cursing me, go ahead. I am Brahman, the world-stuff. I divide myself into infinite pairs of opposites acting upon one another and that is how the world happens.”

Utanga said, “Krishna, you opened my eyes of jnana. I won’t curse you.” Krishna heaved a sigh of relief. For me, this is the stabiliser of yoga and jnana.

In the Mahabharata, the story of Utanga doesn’t end where we left it just now. Krishna asks Utanga to ask a boon, whatever boon. Utanga says the jnana Krishna just imparted him is the greatest boon and he wants no other boon. When Krishna pressed him further, he casually asked for a simple favor, only to please Krishna: “Krishna, if ever I happen to be parched with thirst and couldn’t find drinking water anywhere, please arrange to send me some water.” “So be it,” Krishna said, and took leave of Utanga.

A few days on, Utanga happened to be parched with thirst and couldn’t find drinking water. He remembered Krishna and prayed him to send some drinking water. Just then a Chandala came by — dirty, drunk, and singing bawdy songs. He offered the water in his skin bag, which Utanga promptly refused. The Chandala went his way, singing his bawdy song.

A while later Krishna appeared, crest-fallen. Utanga asked, “What’s the matter with you, Krishna? Where is the water?” Krishna said, “Revered Brahmin, I lost face because of you. When you cried for water, I asked Indra to supply you some water. 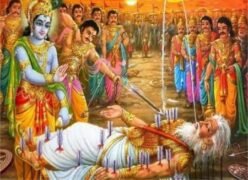 ‘Why water,’ Indra said, ‘I will give him the divine elixir, amrit. But I will approach him in the guise of a Chandala. Is that okay?’ ‘It’s okay,’ I said. ‘Utanga is a great jnani, he won’t mind.’ Indra doubted it and I betted on it. I lost my bet and now I can’t show my face to Indra.”

That is why Bhishmacharya advised Vishnu Sahasranama recitation to Yudhishthira for all life’s problems.

Shirdi Sansthan has introduced recitation of Vishnu Sahasranama in the mornings as a part of worshipping Sai Baba.