A Day In Sai Baba’s Routine

Baba is a perfect Sadguru and all Gods are subsumed in him as he represents all Gods. That’s why Baba appeared in the form of different Gods to different devotees. But real import of Baba’s routine was beyond our comprehension. 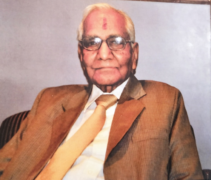 It is really a difficult task to try to attempt to describe the daily routine of Sai Baba who was living in Shirdi. Baba was ubiquitous and was present everywhere. He was also performing miracles by appearing in different forms.

With ‘Sai Prachar’ that was started by Sri. Narasimha Swamiji and later by others, Baba has become known all over the world.

Tarkhad family went to Shirdi and had Baba’s darshan in the masjid. At that time, Baba told a devotee who was trying to take Baba’s photo, “Please go to Tarkhad’s place where you will find me.” Tarkhad and his son, Jyotindra were very happy to hear that statement from Baba. As per Baba’s declaration, there is no difference between Baba and his photo.  Any prayer to Baba’s photo is the same as prayer offered to Baba Himself.

Baba would get up very early in the morning and meditate for some time while sitting partly leaning on the pillar near the Dhuni. No one would be there in the masjid. He would chant words like, “Yaade Haq,” and “Allah Malik” and perform some yogic mudras by hands in between, signifying some communications with or directions to some unknown and perhaps to some invisible divine bodies.

Thereafter Abdul would sweep the floor, trim the wicks of the lamps and refill them with oil. He would also place firewood near the Dhuni for Baba’s use. As the day broke, Bhagoji Shinde would enter the masjid and would softly massage Baba’s hand and feet. Then Bhagoji would get the pipe ready and hand it over to Baba. Baba would take a couple of puffs and hand it back to him for taking a puff. By the time this process was over, it would be about 7.30 A.M. By then the devotee-visitors would be ready to enter the masjid for Baba’s darshan. Baba, while giving darshan, would describe to them how he had saved some devotees who were far away and protected them from being harmed during the previous night, and he would also say as to how he had conveyed those who died during the night to heaven.  After some time, the local devotees would learn that these are true when the concerned devotees from distant places came to Shirdi.

By 8.00 A.M, Baba would start on his begging rounds for alms. He went to the houses of 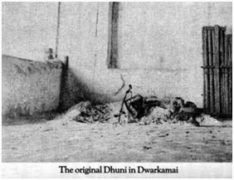 Ganapati Tatya Patil (Bayajabai), Appaji Patil, Sakharam Shelke, Waman Gondkar and Nanduram Marwadi. With affection and reverence, all these householders would offer food as and when Baba approached them. Then it was time to visit Lendi Bagh. Baba used to enter Lendi Bagh alone from the west. He also sat facing the west with his back to the Nanda Deep. Abdul would bring two pots full of water for Baba which he threw in all directions perhaps uttering some incantations and chants.  Baba would also get up from that place and walk few steps in several directions and go on gazing towards that particular direction. It was difficult to know what exactly Baba was doing at that time and it was also not clear whether Baba, while pouring the water and moving in different directions, was chanting any mantras.  Abdulla had the rare privilege of observing such rare events from a distance. 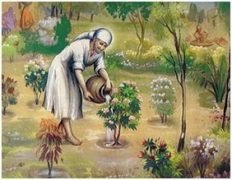 Baba like a gardener went to the Lendi Bagh to nurture the plants. The plants were his devotees, and he pulled out the weeds. The weeds were symbolic of the evil tendencies that would pull the people in different directions. There were many fragrant flowering plants and many peacocks, deer, rabbits, mongoose and birds in this garden.
Sai Baba stayed in the mosque which was totally dilapidated. However, Baba stayed there to bless the devotees.

In the morning, Madhav Fasle and Tukaram would fill buckets with water. Baba never brushed 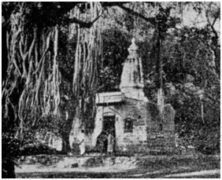 his teeth. He would rinse his mouth softly and wash his face, hands and feet. Then the devotees would start coming for the Kakad Arati with mace, fans and other instruments. Baba would welcome them with a motherly affection. After Arati, devotees would take Udi from Baba and then leave the masjid.

Baba used to sleep in the Chavadi on alternate days, and the Kakad Arati and the Shej Arati were performed at Chavadi on such alternate days. Baba did not bathe every day. In the early days Baba would bathe in the Lendi garden. Later he started taking bath in the masjid. The attendants would bring two copper vessels full of hot water and two vessels of cold water. Baba would mix the water to his liking and slowly 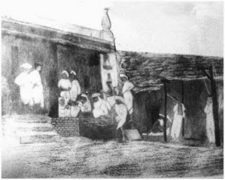 bathe, taking an hour and a half for the bath. He would then stand near the Dhuni while the close devotees would wipe his back and other portion of his body with a dry cloth. Devotees would treat the water used by Baba for his bath as holy water and the devotees would take it and use it for curing their diseases. Later a devotee presented Baba with a stone for taking a bath. This stone is preserved even now.

Baba would not take bath daily but would bathe once in seven or eight days. He would say that he had just taken a bath in the Ganges and that there was no need for him to take bath again. Notwithstanding this phenomenon, Baba would look very neat and clean even when he did not take a bath. After bath, he would place his kafni (ascetic robe) near the Dhuni for drying. He would put it on again after it had dried. He wore kafni at all times and after the bath he would wear a green cloth.

Normally whenever Baba wore a new kafni, he would distribute new kafnis to the poor fakirs 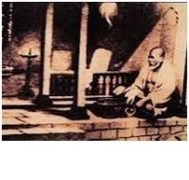 and other sadhus at the masjid.

After some time in 1909, Chavadi procession was started with all the paraphernalia and Baba was the cynosure who drew all the devotees towards him. It is impossible to describe in words the Stately Chavadi Procession. To cover a distance of a few yards between the masjid and the Chavadi, the procession used to take three hours and based on this it can be easily understood how Stately the Chavadi procession was moving with all the required paraphernalia.

Baba would sometimes call a barber called Bala for shaving his head and have his moustache shaped by him and pay him much more than he expected. Baba always used to pay for the labor suitably and sometimes more.

This was the daily routine of Baba. But real importance of Baba’s routine was beyond our comprehension and unintelligible to the ordinary people.