Dear Children,
When you interact with others, you should imbibe Sai Baba. Remember Sai Baba used to beg for his food. He did not bother if someone offered food or declined. Read this below narration:
Sai Baba went to Kulkarni Physician’s house with his begging bowl. That house belonged to a Brahmin and Baba was waiting for alms. Brahmin’s son scoffed at Baba – “You will not get anything here. This is a Brahmin’s house. Get lost as we do not feed Muslims.”
Baba did not get humiliated. He affectionately told the boy – “Listen dear, never say ‘No’ to a beggar! Tell your refusal in a polite manner!”
The boy’s mother appeared with a Roti and some curry in a plate. She scolded her son – “Ram, how many times did I tell you not to abuse anyone coming at our doorsteps? You are just like your father! You do not know in what form God will appear at our door to test us one day!”
Turning to Baba she begged earnestly – “Forgive us, Baba! My son is ignorant. He does not know what he talks! Please accept this little food.”
Baba expressed his happiness, “Allah will be kind to you” after putting the Roti into his shoulder bag and pouring the curry into the tumbler. Blessing the woman Baba went to the next house.
Baba’s apostle Sri. Narasimha Swamiji was also a great Mahatma. Everyday he used to go for a short walk. One neighbor staying in an upstairs house used to throw garbage on his head. Sri. Narasimha Swamiji did not mind this abuse. Even though it occurred daily he used to wipe his head and proceed. One day to his surprise he did not get garbage. Swamiji thought was something wrong. He stopped and went to the upstairs house. He saw the man who used to throw garbage on him was sick and lying on bed. He consoled him and prayed for his early recovery.
A full-term pregnant cow came to Sri. Radhakrishna Swamiji. He gave the cow water to drink and gave a loving look. Next morning the cow knocked at his door and had come to see Sri. Radhakrishna Swamiji to express its grateful thanks.

So, children, develop an attitude of universal brotherhood. 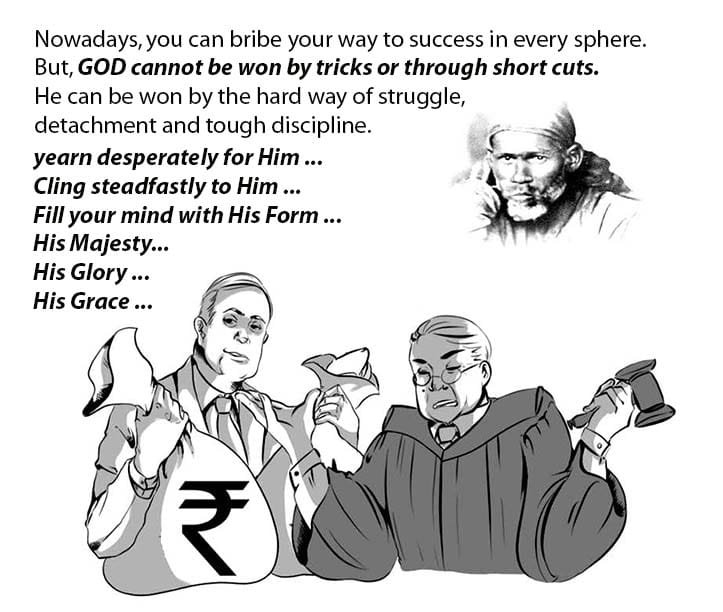