Sri Narasimha Swamiji was a lively, energetic and studious child brought up in a deeply religious and generous atmosphere. Later, he became a leading lawyer, politician and a person of social eminence. A tragedy in the family acted as a turning point, as he left the warmth and security of his home. His quest lasted for more than

eleven years until he went to Shirdi to obtain a ‘darshan’ of Sai Baba’s samadhi. It was that historic day, 29th August 1936, which changed the course of his life. Sai Baba took possession of Narasimha Swamiji. He became an evangelist and spread the message of Sai Baba all over the country. As long as Sai Baba’s name is there in this universe, Narasimha Swamiji will be remembered, with reverence and faith.

“Swami Narasimha’s relentless search for his Guru is both most admirable and heart-wrenching at the same time. Few would be able to match his single-pointed focus, resolve, grit, determination and perseverance. In the quest for his Guru, he underwent extreme hardships physically, mentally and emotionally for 11 long years, before he eventually reached the Samadhi of his Guru – Sai Baba of Shirdi.

Even though Sai Baba had already left His physical body by then, Swami Narasimha spent the next 20 years of his life in Shirdi spreading Sai Baba’s teachings throughout India. The tremendous efforts that he had put in selfless service to his Guru was exemplary.

It is evident from this precious gem of a book that Sai Baba will never forsake His devotee. The true yearnings of a seeker for a Guru will never go unsatiated. Unlike man who judges us for the results that we produce, God (Sai Baba) judges us for the sincere efforts that we put in. The Divine Hand of Sai Baba can be seen guiding Swami Narasimha at every stage of his spiritual journey throughout the book.

This very well-written book which chronicles the extraordinary spiritual journey of Swami Narasimha is a must-read for every seeker, aspirant and devotee on the spiritual path.” 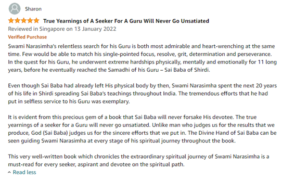