Bapugir Bua whom Baba used to call Ramgir Bua, was a young boy and was studying in a School in Shirdi. He was residing in the house of his mother’s grandmother when Baba first arrived in Shirdi. As observed by him, when Baba came to Shirdi, he had long hair flowing down to his buttocks, wore a green kafni and an ochre-colored cap on his head, and a satka (short stick) with a chillum (earthen pipe) and a matchbox.

He also recollected that Baba at that time appeared to be 25 or 30 years old and that he came to Shirdi accompanied by one Patel of Dhoopkheda. Patel came to Shirdi to settle the marriage of his relative, by name Hamid with a girl from Shirdi. After the marriage, Patel and others left Shirdi and Baba remained in Shirdi. Thereafter Baba made Shirdi his permanent residence and this was as per the observations of Ramgir Bua.

Chand Patel was Patel of Dhoopkheda and he told that he lost his horse once and that he was searching but could not locate it. In the course of his search, he met Baba, and then Baba told him that his horse was near a streamlet nearby immediately Chand Patel went to the streamlet and found the horse with the Grace of Baba. 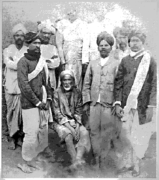 But, there is a lack of clarity in the stories of the alleged wrestling match of Sai Baba with Mohdin Tamboli in Shirdi in about 1885. It was known from several sources that Sai Baba had been wearing fakir garb right from the day he arrived at Shirdi. So the statement that Baba switched over to wearing fakir garb after he was defeated by Tamboli, is unfounded by events and facts. Furthermore, Ramgir Bua who observed Baba in the beginning, informed that Sai Baba did not wrestle but instead had a disagreement with the son-in-law of Tamboli, and thereafter, he retreated to the nearby forest. Once Saipatham Team also interviewed another wrestler, Sakhdev Tatyabawag in December 1991 who had seen Sai Baba during the early days of his arrival in Shirdi.  At the time of the interview, Sakhdev was aged about 105-110 years. He visited Shirdi so many times and participated in wrestling. According to him Sai Baba never participated in wrestling, but he used to watch wrestling.  Another account says that there was a person by the name of Mohdin Tamboli in Shirdi. He was from the Khandesh district. Tamboli never participated in wrestling, but mostly acted in ‘Tamashas’, a type of theatrical performance. When Baba had all the eight powers “Ashta Siddhis” at His command, there was no reason as to why He should lose in wrestling. Based on all these aspects, it can easily be construed that Baba did not participate in wrestling. Later Baba came back to Shirdi and started living near the neem tree and later moved to the old and dilapidated mosque.

Once Gangagir Bua, a sadhu of Vanjargaon came to Shirdi and visited Baba in the masjid and spoke to Nanasaheb Dengle and others, saying that Baba was a Chintamani, a gem among saints, and praised Baba and that Shirdi was lucky to have him.

Ramgir, though a resident of Shirdi, was moving to several places and coming back to Shirdi. While staying in Shirdi, he observed some of the miracles performed by Baba. He observed Baba telling about certain events that took place at distant places as if they were happening before his eyes.

Nanasaheb Chandorkar was Mamlatdar of Jamner Taluka of Khandesh province. At that time, Mainatai, the elder daughter of Nanasaheb was in advanced pregnancy and was about to deliver a child.  In Jamner, the doctors and nurses were trying their best to help Mainatai in delivering the child. However, their efforts proved to be futile. Nanasaheb then resorted to invoking the blessings of the Almighty and arranged to perform religious rites like Navachandi Havan/Homam, Saptashati Pathan, etc. But, the child’s birth was not taking place. Even the life of Mainatai was in danger. At the same time in Shirdi, Ramgir Bua suddenly developed an urge to go to his native village in the Khandesh area. He, therefore, went to Baba to seek His permission. On the same evening, Baba also called him and asked him to go to Jamner starting immediately and carry with him a packet of Udi and a copy of the arati song, “Aarti Sai Baba………” and deliver them to Nanasaheb Chandorkar in Jamner.

Ramgir told Baba that he had with him only Rs.2 and asked Baba how that amount would be sufficient to travel from Kopergaon to Jalgaon by train and from Jalgaon to Jamner by tanga as the total distance is more than 100 miles. Baba said that everything would be taken care of and that he should not worry about the journey. That was a Friday and Ramgir immediately started and reached Manmad at 7:30 PM and Jalgaon at 2:45 AM on Saturday. At the Jalgaon railway station, there were some restrictions due to the outbreak of plague and he had some trouble. When he came out from the station at about 3:00 AM, a peon having beard and mustache and wearing boots and a turban on his head and equipped with a presentable attire appeared with a tonga and started calling – “who was Bapugir Bua from Shirdi.” Only Baba used to call him by that name and nobody else. Although Ramgir was somewhat surprised to have been addressed by this name, he came up to the peon and introduced himself. Then the peon told him that he came there on orders from Nanasaheb Chandorkar to take him to Jamner. Then Ramgir felt happy and sat in the tonga which raced to Jamner at a very high speed as the distance to be covered was 30 miles. On the way to Jamner they stopped at Baghoor, the peon offered refreshments to Ramgir who hesitated to eat them. Seeing his hesitation, the peon told him that he was a Kshatriya Hindu from Garhwal and was a Rajput by caste. Then Ramgir partook in the refreshments. They then reached Jamner early in the morning. Ramgir went to attend a call of nature and returned and found to his surprise that the peon, tonga, and horses had all disappeared all of a sudden. 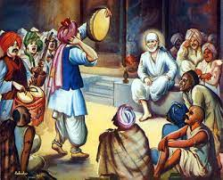 Then he went to the house of Nanasaheb Chandorkar which was nearby and gave the Udi packet and the copy of the arati song to Nansaheb. Nanasaheb went inside the house and gave the Udi, and a copy of the arati song to his wife. Heasked her to mix the Udi in water and give it to Mainatai. The Udi was immediately given to Mainatai, who was going through severe labor pain at the time of her delivery. The arati song also was sung and she had a safe delivery without any pain.

Ramgir Bua thanked Nanasaheb for having sent his peon with a tonga to Jalgaon and this had helped him to come quickly to Jamner. At this, Nanasaheb said that he did not send any peon and tonga as he was not aware of Ramgir’s arrival. Ramgir Bua was surprised and also Nanasaheb was equally surprised and thought that this was all due to Baba’s miracle. This was a great miracle as Baba himself came as a peon/tongawala and managed and arranged all necessary things precisely and accurately to help the devotees. This miracle happened in 1904. In Sai Baba’s history, this Leela of Sai has become the great Jamner miracle. Ramgir Bua was one of those most fortunate bhaktas who lived with God.