Tosar heard for the first time the name of Sai Baba and his greatness in 1910 from Das Ganu Maharaj’s kirtan. Das Ganu would first display the photo of Sai Baba and start kirtan, and this was his routine even if he were to be doing a kirtan on any other saint. During his kirtan, Das Ganu would dwell at length about Sai Baba’s mission and miracles. Tosar was very much impressed, and he considered that Sai Baba was a divine saint and asked Das Ganu whether Sai Baba was living at that time. Das Ganu said affirmatively and also said that Sai Baba was living in Shirdi at that time. Tosar went to Shirdi for the first time in 1910 and had darshan of Sai Baba. In the next six months, he visited Baba nine times. He subsequently went to Shirdi several times in later years also.

Before Tosar went to Baba, he met Vinayak Bhat Shandale in 1900, a sadhu who acted as a medium in his spiritual efforts. On advice from this sadhu, he had read Yoga Vasishta with devotion. Thus Tosar had a number of stepping stones before finally going to approach Baba. He was then in service, in the Customs Department and continued in it till 1926 when he retired on pension after 31 years of service.

Tosar came under a Guru’s influence in 1895 for the first time and he saw the Guru in a dream. When he went to Shirdi in 1910 and had darshan of Baba, he found that Baba was the same Guru who appeared in his dream

In his first visit to Shirdi in 1910 there were no crowds in the masjid. After 1910, huge crowds from Bombay started pouring into Shirdi. As observed by him, numerous devotees pressed into new systems and ways on Baba to suit their own tastes and made several types of pooja rituals about Baba and made Baba shine with these arrangements in a glorified and royal way. He felt that Baba’s real greatness was not properly understood by these arrangements and pomp. 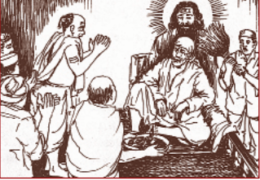 Tosar became Sri Narayan Ashram after receiving Sanyasa Diksha and became an ascetic. Though he was living with his wife and family members in the same house, he was observing the rules of an ascetic. He was totally devoted to spreading the messages of Baba and his miracles. Whenever Sai Bhajan groups gathered, he used to participate in such gatherings and used to sing Sai Kirtans with his melodious voice. He also participated in the All-India Sai Devotees’ Convention held at Poona during 1952 where he sang Sai Kirtans melodiously. Such was his devotion to Baba and was devoted fully for propagating about Baba’s mission and miracles during the remaining period of his life.