A Dip into Vishnu Sahasranama: Sahasranama Respects Divinity in Everybody

Latin for ‘respect’ is respectus which simply means ‘a looking at’. Derived from the word 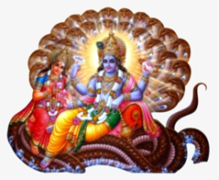 respecio, where re means ‘back’ and specio means ‘to see’, it’s non-judgemental and signifies plain observation. On the contrary, the dictionary meaning of ‘respect’ is ‘to have a high opinion’. Our primary opinion about others is based on the visible aspects of their personality, to which we have access as we are oblivious of their deeper motivations. As deeper aspects of personality surface, particularly the dark side, all respect dissipates. Many revered gurus and spiritual leaders lost reverence unexpectedly. Man is not perfect but a mix of good and bad qualities. We revere a person for good and despise him for bad. Hence, reverence isn’t stable; it’s rather subjective, fragile, and tentative without complete facts.

We have two aspects within: the unchanging essence, the ground of our being, and the variable. The unchanging is the infinite, non-local, cosmic, or universal Self with which we were born and in which we ultimately merge. Other is the finite, local, though rigid, yet changing ego-self. This we accumulate and deeply identify with.

Self is one but appears dual. For example, if we squeeze an inflated balloon with our hand, it deforms and appears as two but when released, restores its original shape of a single balloon. The same analogy applies to Self. When the singular Self identifies itself with the mind-body complex; this gives birth to the ego-self. When ego-self subsides, what remains is pure Self.

The ego-self constitutes deep invisible desires, intents, motivations as well as visible actions and behaviors. Possessed by desires, the ego’s fundamental need is gratification. Fearful of losing identity, it constantly defends and craves for attention. It sees others as separate and considers disagreement as a threat to its existence. It persistently demands submission and derives pride in authority and pleasure in subjugation. Therefore, revering ego only inflates it. The same applies to self-respect. By holding our ego-self in high esteem, we reinforce our deep intentions, attitudes, and beliefs, and become more rigid.

The 22nd shloka of Vishnu ahasranama is –

Lord Vishnu is free from death (Amrutyu), one who sees everything (Sarvadhrik), is Narasimha – the combination of man-lion (Simha), is the regulator (Sandhata), ordainer (Sandhiman), firm (Sthira), one who is birthless (Aja), unbearable (Durmarshana), Ruler and Punisher (Shastha) of Renowned Self (Visrutatma) is the destroyer of the foes of good men (Surari).

Since respect connotes both plain observation and reverence, it’s pertinent to ascertain what in a person is worth revering or simply observing. We must observe an ego without judgment or reverence. However, reverence is something deep. It flows from the core of our being as a consequence of heartfelt appreciation for the other.

Hence, on feeling betrayed, we experience loss of our self. Revering ego is futile but certainly, we can revere the underlying unchanging reality, the infinite Self, of which ego is only a shadow. This requires diving deep and reaching the core. For this, we have to first free ourselves from clutches of self-image to which we relentlessly cling and defend. We are the prisoners of our ego. It’s the crust we have accumulated over the uncontaminated Self that has created a void within and left us secluded like an island in relation to others.

We have to penetrate this crust of ego to reach our deepest core. We then, come face-to-face, ‘re-look’, see and experience the singular Self that pervades one and all.

Once Mrs. Khaparde came with a tray of food covered with a cloth as an offering for Baba after the noon prayer. On seeing her, Baba yelled with pain – “O mother, I am dying, I am dying.” He started rubbing his right shoulder and leg as if someone had beaten him up. Mrs. Khaparde kept the tray aside and started massaging Baba’s leg with care. After some time, Baba said – “Mother, I went to eat curds and had thrashing on my shoulder and leg.” Baba had not even moved from the mosque. How then could he have gone to eat curds? He pointed at a Brahmin in the crowd and said – “Well brother, are you happy? You have beaten me on my shoulder and leg for no fault of mine!” That Brahmin was frightened! He spoke nervously – “How will I ever beat you Baba? It is unthinkable.” Baba raised his gown and showed fresh swollen marks n the shoulder and right leg.

Baba spoke to that Brahmin – “Listen, did I not come to you sometime back? To eat your curds?” The Brahmin virtually wept – “Oh God, was it you, Baba, in the form of a cat?” He recollected the entire episode. He was suffering from Asthma and Baba had advised him not to use curds. But he was fond of curds. So he prepared curds every day. But a cat used to come and eat the curds. To prevent this, he kept the vessel in a hanging sling. Even then the cat ate away the curds. He laid a trap and when the cat came that day, he trashed it on its shoulder and right leg! Baba did not want his devotee to eat curds and ruin his health. But he missed Sai Baba in the cat!

Seeing this great ‘Leela’ Mrs. Khaparde recollected what happened a while ago. On her way, she came across a pig. She offered a chapatti to it mentally considering it as a form of Sai Baba. Baba referred to this and told Mrs. Khaparde – “Mother always remember me! I am in every living being – whether animal or human. Just as you love me here, love everybody else everywhere.” He asked her to come closer. In her ears, he said – “Mother, whatever you may be doing anytime, remember to recite the name of Prabhu Ram! Let ‘Rajaram, Rajaram’ be on your lips! Sure he will look after you!”

Mrs. Khaparde was extremely happy. She felt she had achieved everything in life! Keeping her head on Baba’s feet she prostrated before him to have his blessings. Baba muttered – ‘Allah Malik’! Immediately Baba pulled the tray brought by Mrs. Khaparde. He relished the entire food brought by her.

Madhava Rao protested that Baba had favored Mrs. Khaparde. Generally, he would taste bits of everyone’s offering after ‘arathi’. Today he had eaten the entire food brought by Mrs. Khaparde and may not eat after arathi.

Baba told Madhava Rao – “Shama, you will never know the sweet taste of this mother’s food! Do you know, once she was a cow belonging to a Bania – a very fat cow, full of milk! Everybody was pleased with her sweet milk! Later she was reborn as a human, born in a Mal family. When grown up she was married. The food she cooked for her husband he cherished so much that he would forget even his job before it. Later she was born as a Kshatriya. And here she is now a Brahmin lady married to Khaparde! Shama, everybody cooks food, but she puts her heart into it! She pours love into it! And with affection she serves it to all – even to her servants, the beggars and the poor coming at her door, the dogs, crows, sparrows – all are served with love! Why should it not be tasteful? I met her after a long time and that is why I ate so much more from her plate alone! Tell me, was it wrong?”

Madhava Rao had no answer to this question.